That Home Away From Home 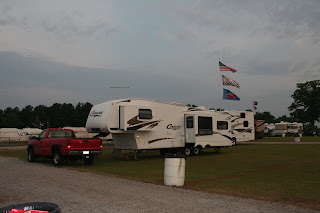 I know it's silly.  This very same weekend used to be fraught with tension.  There would be endless traffic, generators that would make your ears bleed and uncertain suppers concocted out of our Escort's trunk.  Those were the days of youth and exuberance.  Totally committed to watching every minute of racing to be had at New Hampshire Motor Speedway, we rose at the crack of dawn to beat the traffic jam and would return to our home somewhere around midnight, only to repeat the feat the following day.  It sucked.

Then we graduated to the level of Racing RV'ers.  But this isn't an instant move into a mobile mansion thing.  First you decide that one of the little 16 ft trailers would fit you and your husband just right.  Heck, we splurged for that first mobile hotel room and nabbed a 23 ft. travel trailer complete with a bedroom and shower not combined with the toilet.  Then we discovered the only storage existed under the bed, you couldn't cook at the stove unless everybody else was banished from the trailer and well...life was much better if you basically tailgated outside the trailer.  I won't get into the separating wall panels, leaking roof, lights, plumbing...it was a handyman special, shall we say.

But it did introduce us into that mystical RV lifestyle.  Now instead of hours spent in traffic, we parked our carcasses early in the week and became part of the track scenery.  We were able to watch empty acres transform into a mini-city of a mere 100,000 in five days, and then vanish again come Monday.  But there was still the issue of eating campfire smoke for 7 days and discovering all the ways a lawn chair is not the best place to sit for long periods of time.

Thus came the step-up to the next camper, a 36ft. fifth-wheel.  I really think they should just get rid of the misnomer once you have a queen bed, sleeper sofa, rocking armchairs and a kitchen that rivals my own.  It's a house on wheels.

We spent about four years stocking it with its own things; no more shuttling pots, towels, pillows, etc. back and forth between house and trailer.  We pack clothes and food, check the propane and hook it up to the truck and we're off.  And when we arrive at whatever track we're visiting this week, we're home.

Yep, home.  With the purr of the generators (they don't tend to roar as much these days,) the smell of woodsmoke and the happy noises of friends sharing a brew, we sit down and instantly feel the work-day stress slide away.  There is no phone, save for the cell that nobody on the planet has the number to.  There are no deadlines, no customers, no staff, no co-workers.  For once we actually get to say "No!"  And just sit.


Until the first engine turns over in the morning and we are off to the races! This is the life...at least until Monday morning.
Posted by S.D. Grady at 10:06 PM No comments: