The end of the season...

And the start of something new The amount of disinterest I held for The Chase this year was rather, well...it was boring. Yes, Lil E and JG made it in. But we knew they wouldn't win. Neither of them had it on this year. Good, as always, just not WOW. Even the Champ Jimmie Johnson and Matt Kenseth put on a slightly ho-hum show as they closed in on the final races. The stories I wanted to watch (Denny Hamlin and Jeff Burton) while intriguing in their novelty, just didn't do it for me. Of course, the Saturday afternoon Cup Series that was the weekly prelude to the Sunday Cup event did nothing to spur my interest either.Let's just say that I'm glad it's over. And there's so much coming! 2007 is the season of interest. Toyota, immigrants from the IRL series, veterans taking it slow...leaving Mr. Gordon to look ever more like the elder statesman. (Mike Waltrip will never earn that accolade). The much debated Car of Tomorrow will take its bow. And right now Goodyear is trying to stave off a very ugly invasion by Hoosier. Goodyear might lose their contract if they can't settle a strike with the Steel Workers Union (it took me a moment to figure that out...until I remembered steel belted radial tires..ah! Steel!)On the local scenes...Mike Dillon won the BGNE series with Sean Caisse giving him a run for the money. Sean is young and very eager...too eager if you remember his debut in a Busch car at Dover. Patience Grasshopper It will come. However, fighting off the seasoned new-comers to NASCAR from other top flight racing series will be no easy task. The bar just went astronomically higher.Rousch...with Mark Martin stepping out and heading over to the competition, who will lead the garage? Biffle? Kenseth? Neither of them strike me as a spokesman for their fellow drivers. Edwards...maybe. But who's gonna listen to him? MacMurray? Nope. Also, the deal for selling half the team to the Red Sox fell through when the head office decided to bid for that ritzy Japanese pitcher. Things don't look so good to me.Hendrick...smart move inviting Casey Mears on over. Well, that's all for now. No, I don't have comments about drivers in tuxes. They don't belong in them. I'll try to start blogging more consistently, but other endeavors have distracted me, and as I said, there wasn't a whole lot to be said again Catch ya later!
Posted by S.D. Grady at 2:15 PM No comments:

Thanks for leaving a comment, Stewartfan. I apologize for it not publishing...e-mail provider being stupid.

Well, here we are--the off-season. Good God! What do we do now? No engines revving, no pretty rainbows screaming around a track...just the abyss. Ugh.

Well, actually I'm kindof glad. This season was a whole lot of nothing stories, really. Denny Hamlin provided some entertainment by being the shining young gun. But otherwise, it was more about endings than wins. The end of Mark Martin's run in the #6, Dale Jarrett leaving the #88, Kenny Schrader silently slips into part-time with nary a word...the end of manufacturer provided sheet metal templates. The end of Detroit supremacy as Japan enters NASCAR. I can only hope this will be the end of carte blanche for cup teams in Busch.

But an end means somewhere there is a beginning. Something new. Hopefully something interesting.

Until January (yes, I watch testing in Daytona)
Posted by S.D. Grady at 8:46 PM No comments:

I've been remarkably quiet lately...so much to do! So little time ;-) Currently I'm waiting on a few things. I'm waiting to hear back from a publisher on my novella "The Shape of a Woman". I'm waiting to hear back from the judges for final placement in the Wallflower "Black Moment" Conest...my historical novel "The Forgotten Princess" was honored with finalist placement so far. I will be putting the final chapters on another novel "A Child of Uncertain Birth" over the next week or so. And of course, the holiday madness is about to take over. ACK. Hubby and I are also going over our photos from the past year for a special treat.

*waiting anxiously for Jimmie Johnson to win the Nextel Cup* 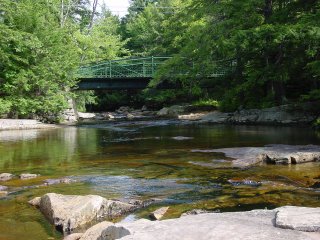 Upon arrival in Jackson, NH the first thing you have to do is cross a covered bridge. The bridge is red, wood and one lane wide. If you think you are bringing your 35ft. RV with duelly pick-up, cell phones and slick credit card life...you better think twice.

The bridge takes you into a village that is snapshot of New England as it has been for two-hundred years. Taverns, inns, little white churches and small shops for the locals.

The rush of the tourist laden traffic jam on Rte. 16 is instantly gone. You have crossed over... Enjoy yourself. 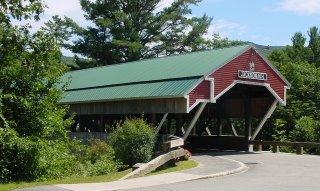 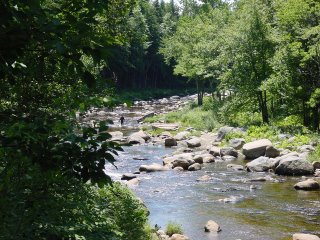 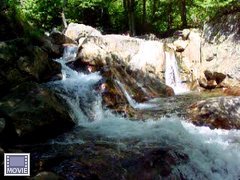 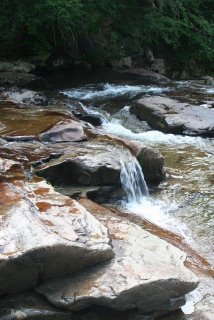 Hello! We just returned from a two-day get away to the White Mountains. It was like a moment out of time. We stayed at Eagle Mountain House, an historic inn located in Jackson, NH. Just down the mountain is the Jackson Falls. 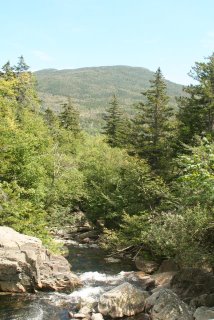 Where vistas of the White Mountains combined with the never ending rush of the waters chasing the rocks down the slope. 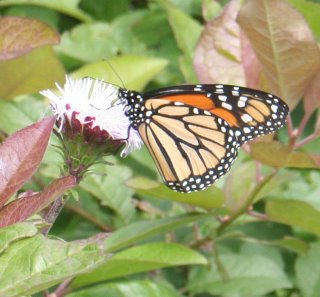 And butterflies could stop to stoke up for their fall flight south. 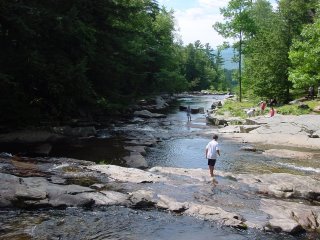 And people can stop to dabble their toes in cold water and soak in the sun. No phones. No boom boxes. And not even a hot dog vendor to be found. Just an afternoon spent the way it was...and always should be.

I created a Slide Show! Check it out!

Don't know how or why, but there it is. It's most frustrating. And it impacts almost everything I do. Lifting a can of soda, putting my hair up in the morning, getting dressed...any motion that involves raising my right arm while holding something. I have a brace for my elbow and it helps to keep me from moving in a damaging manner.

Now it's time. Time to let the muscle inflammation go down and let the small tears in the muscles heal.

I hope it doesn't take too long, I miss writing my stories.

Have I said how much I love Carl Edwards? 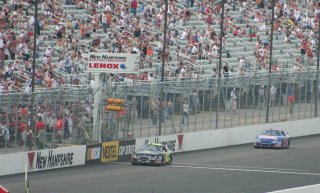 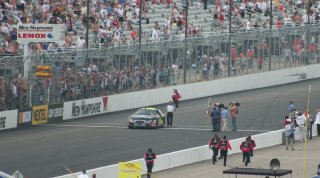 Nothing more needs to be said. Carl Edwards won. And I flipped! Well, he did...but I did, too. 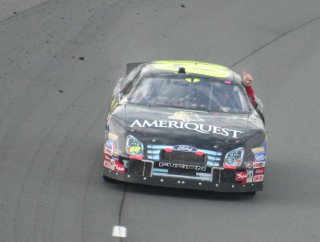 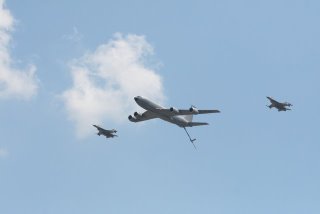 Opening fly over for the Cup Race...

Whelan Modifieds and Busch at NHIS 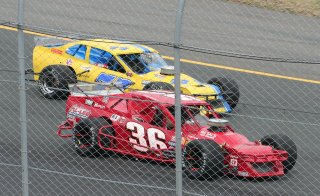 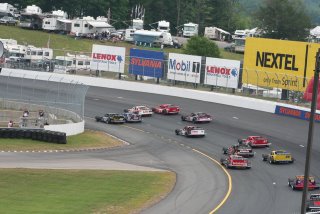 Four wide racing...you won't find it in any other series at NHIS. 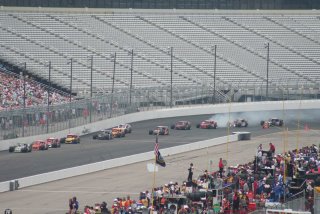 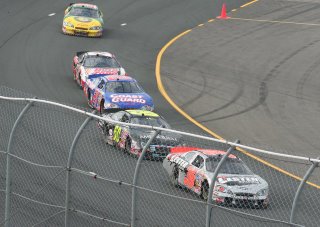 The end of the Whelan race was cut short by a blown tire on the #06.

Nearing the end of the Busch Race...#60 Carl Edwards is keeping an eager #21Kevin Harvick behind him. 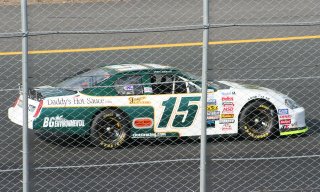 First we have John Salemi in the #15. Last year he was recognized by his peers for putting on a first class fight on a shoe-string budget. This day he crashed out :-(


The final race was between #44 Sean Caisse and #61 Mike Olsen. They traded paint for lap after lap. 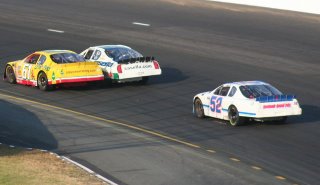 As you can see, Mike took the checkers. Sean won the week before. Fantastic racing! 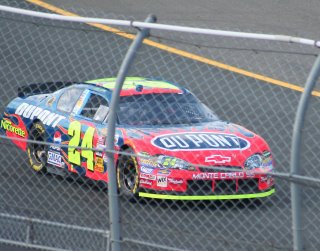 We've got Jeff Gordon and Jimmie Johnson taking their qualifying laps and the opening lap of the Grand National Busch East division...it's all good stuff! 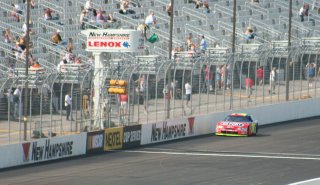 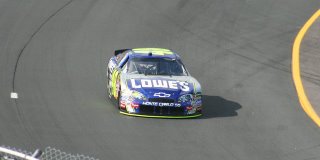 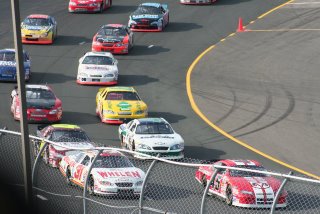 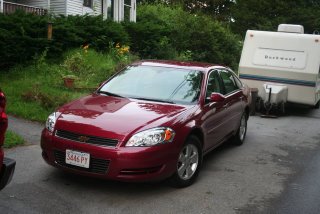 I'm sure everybody who shops for a car goes through all the agony I do. Earlier this spring my 2000 Impala began to show signs of its age. I fixed the intake manifold, then I fixed the power steering belt (including tow), then came the rotors, the battery and alternator (another tow at 11:00PM on I495 in the rain). The service department let me know the tie rod ends were gone, Richard discovered a missing bolt on the sway arm and the A/C no longer spewed cold air. It did admirably with the hot...but no cold. Oh! And the fans fried a resistor pack. The blue car was telling me it was ready to retire.

After some soul searching I decided what I wanted to finance and discovered I wouldn't be looking at another Impala. It was most depressing. So I entered into the world of the Economy car. I test fitted a Toyota Corrolla, Honda Civic, Chevy Cobalt and Mazda M3. One salesman told me the smaller steering wheels would help me turn the car easier...I was pretty sure it was so I wouldn't hit my elbows on the doors. The high MPG ratings looked promising. But...but... I'm a car girl. You all know this! I have LOVED driving my V6 roomy Impala for the past seven years. Before that I puttered with 4-cylinder cars. Something was missing; a growl under the hood when I demanded a little more from the engine.

So this week when my Chevy dealer called to let me know that they were having a 0% Financing Sale this week, I saw my chance. Without paying a bank, it was possible to keep the little monster under the hood. So today we trotted down to the dealer, picked out a pretty red car and took her for a spin on the highway. Oh yeah. She was coming home.

2006 Chevrolet Impala LT. Sport Red. Ivory interior with lots of buttons for me to play with. The remote start was standard (So I don't have to walk out to a dark car at 2AM on Saturday nights) and this time cruise control was included as well. Oh! And it has a compass program that tells me to drive in circles to set it. Yeah, I'm chuckling. I will get to play with ONStar and decide if I will give up my ancient suitcase style cell-phone. It serves much the same purpose plus theft deterrent.