After All, Today is Another Day 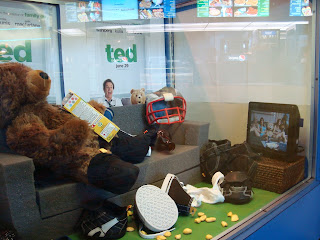 Some days you get up in the morning and just know it's one those "start over" days.  That was yesterday.

Today I woke up and promised myself it would be a better day.  And that appeared to be debatable when I arrived at work.  Got out of the car, pulled out the rolling briefcase, juggled car keys vs. work keys and started to walked toward the building.  I passed over a storm grate just as I gave a nice energetic flip to the massive key chain and guess what?

Uh huh.  They flew through the air, I missed them on the downward flight and they landed on the grate...for a second.  Before they slipped between the holes and down...

Well, crap.  Maybe today wasn't meant to be any better. But--there's always a bright side, right?

The drain is only 3 feet deep.  The keys landed on a pile of leaves.  I could see them!  I just needed to get them back out.  Which my cleaner, Moacir, did quickly with an old coat hanger.  Don't ask what kind of deities left a single wire coat hanger in the booth--because we don't actually get them with uniform orders any more.  But let's not look a gift horse in the mouth.

The moment of panic passed.  My keys are back in my possession (you would not believe the kind of headache my keys getting lost would create) and the day is getting on. 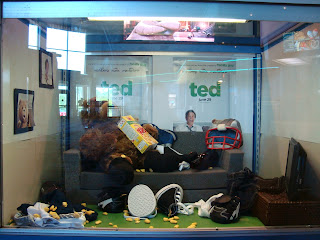 Another good thing, the "TED" display is adorable--for all the wrong reasons.  I wouldn't take any child to see the movie when it releases next week, but I won't be missing it, either.  Check out the trailers at http://tedisreal.com

It's a day off, so I should be able to accomplish what I wish.  I headed to the dining room after doing a couple critiques, thinking I could tackle the laundry.  Along the way, I notice the cats are not sprawled on the bed as is their custom.  I enter the dining room and immediately spy Emerson lounging in the window.  Right, one kitty checked off.  But I haven't tripped over Betty--as she's taken to flopping in the middle of the floor.  Odd.

I noticed her tail on the arm of the couch.  Ah, there we are.  She is full on lounging in the white laundry.  Guess I won't fold that this instant--but it is a cute picture.  I run upstairs to grab my camera.  Dead battery.  Fine.  Plug it in to charge.

I go in the kitchen to take out my tablet--it has a camera in it.  Guess what?

One.)  Betty has abandoned her napping spot and photo op so she can beg for food. AND
Two.)   Dead battery.

FINE! Everything's charging. Feed the cat. Now, I could tackle the peach cobbler I promised I'd cook....wait for it.

I put all the food away, thumped the cat and grabbed a bucket of darks to fold--upstairs.  It's safer up here.

Hoping for better things after the batteries charge.
Posted by S.D. Grady at 12:45 PM No comments: 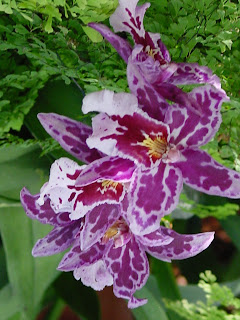 It's another day, another dollar.  We get to work, say good morning to our co-workers, and let the bitching begin!

Well, today I'm not listening.  The door is only open to those who have positive comments to add to the conversation.  So, this is simple!  Leave a comment below--

What makes you happy?  Did you see something that made you smile today?

I'm listening to Celtic Woman to help banish the grembling.  That's my happiness for now.  What's yours?
Posted by S.D. Grady at 11:01 AM 14 comments:

Piles of Bricks and Writing Prompts


Really, it's just a pile of bricks covered in nameless ivy that shields a rotting tree stump and a crumbling foundation that belonged to a long ago demolished barn.  Move the bricks from here to over there by the fence and make a decent border, much easier to weed wack.  At least you would think.

But, you know, after I identified the fourth creepy crawly bug I just had to stop jumping and going, "Oh God."  I'd never get this done!  There were  daddy long legs, hairy black spiders, furry red ones, pill bugs, black slugs--

Okay, I've dug up lots of the white slugs before.  But these black ones are kind of a dark purply color.  Really gross looking.

Earthworms, snails and why did the shadows under the rotting tree make noises? *shiver*

So, there we go.  My backyard, the home of my RV, a pile of wood, left over bricks from the last century and BUGS!  AHHHH!!!

Makes me wonder what else might be lurking beneath the surface of grass and anthills.
Posted by S.D. Grady at 6:38 PM No comments:

All Those Screaming Fans at the Brad Paisley Concert

I'm showing my age...or perhaps not.

This past weekend I attended the Brad Paisley concert at the Comcast Center in Mansfield, MA and admittedly had a great time.  I do get to a few music performances of varying genres each year.  In the past year there have been the Celtic Woman, St. Louis Symphony, Organ and Choral concert at Harvard, The Stray Cats, Foghat and Montgomery Gentry.  The other "pop" concerts were either in tiny venues or at the track--both of which have an older demographic.  This applies out of hand to the classical performances as well.

I tend to thoroughly enjoy concerts and am generally the one singing along--even the choral works.  There was a moment of either mortification or serendipity at the Foghat show when I appeared on the jumbo-tron.  Yep--that was me bouncing around on the track.

So you might understand when I say I was more than disappointed that the Stray Cats show elicited a rather sedate reaction from the crowd.  Everyone so nicely sat down and nodded to the strumming of the string bass.  So help me, where did their sense of party go?

Thus, after a 20-year hiatus since I bought a "big" concert ticket, my Brad Paisley experience drew me back to the days when...

In my immediate world, it seems to me that I am the predominant Country Music demographic in the Northeast--somewhere over 35 middle America.  When we pulled into the parking lot at the Comcast Center I was shocked to witness an apparent explosion of all the local college campuses decked out in cowboy boots and hats.  When had I missed the youth invasion?  Ah well, I was here to have fun, too.  And the young 'uns didn't disappoint.

Yes, Brad Paisley earned my hard won money with his heart-warming lyrics, sharp comic wit and devastating guitar playing ability.  But how can one person stand on that vast stage for 90 minutes and get the crowd involved?  Oh yeah, that's right.  When you're 21, with your friends and at a concert you will make noise.

It's a joyous sound--one that resonates through your heart. And this huge crowd reaction is what I hold dear in my fading memories of summers spent dancing to the Beach Boys, Paul Simon, the Doobie Brothers, Gloria Estefan...those were the days.  But yes, I got up and sang with the guy on my left and the girl on my right.  For a couple hours it just doesn't matter who has the formal training--only that you share your love of music with those around you.

I could run a line by line review of all I saw and heard on Sunday night--but it won't be solely Mr. Paisley's performance that will stick with me through the years and encourage me to click on those tickets again.  It's the chance to involve myself with the rest of humanity for a happy interlude that is the real reason that I'll never be too old to join the youth in rockin' out on a hot summer night.
Posted by S.D. Grady at 5:00 PM No comments: